In our previous post we had the following cpu profile: 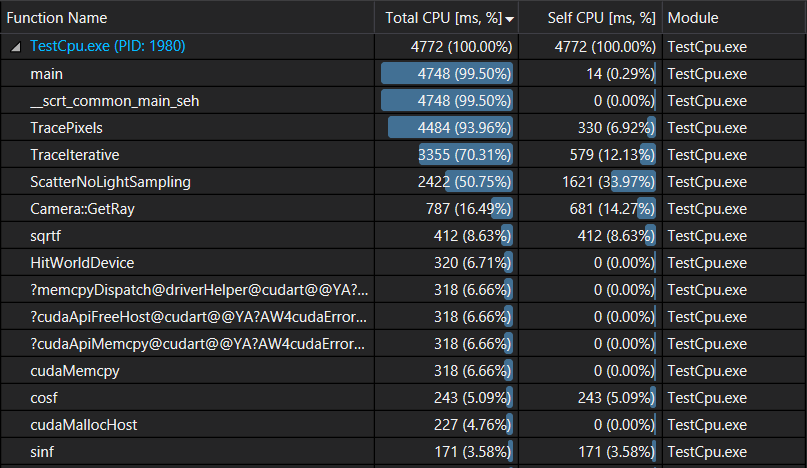 As we can see, generating the scattered rays is what takes the most of our rendering time. So the next logical step is to move it to the gpu. Once we do that we should move ray generation as well to remove any need to copy data from host to device. After that we won’t really need to compact the non active rays, at least not for now. So we’ll start our work from the version of the code prior to ray compaction.

As we already described in one of our previous posts here is the pseudo-code for the rendering logic where ray world intersection is handled by the gpu:

Rewriting the scatter logic to work on device isn’t that hard, most of the code will remain the same. But scatter() relies on a simple xorshift pseudo-random number generator. Xorshift relies on a single state variable that’s updated every time we generate a random number. For the cpu code it’s not an issue as we handle all rays sequentially so they can all share the same state, but for the gpu we need a separate state per ray.

The general idea is that we want to generate a random seed from the frame number, and the ray’s Id. I used the following formula which seems to give satisfying results:

It’s based on the following course.

Wang hash is motivated by the following blog post

Once we intersect all rays with the scene, we compute how many of these rays are still active, and we use it to track the total number of rays handled by the render. This is mainly used to compute the final performance measure (rays/s).

Once we move the scatter logic to the gpu we will no longer need to copy the hits back to the cpu at the end of each frame, so we’ll have to count the rays in the kernel code. This is not as straightforward as it seems and we’ll leave it for a future post in the series. For now we are going to assume that the number of rays is the same for both cpu and gpu implementations, as we are using the same logic and pseudo random generators.

Once we figured out how to compute xorshift state and decided not to count the active rays for now, moving the scatter logic to the gpu is straightforward. Here is a link to the commit. The only reason it’s so big is that we are still keeping the cpu implementation for now so we need to duplicate most of the used functions to use Cuda’s float3 and to mark them as device functions.

Running nvprof on the renderer we get the following output:

We can see that most of the time is now taken by the kernels, as we are no longer copying huge amounts of data between the host and device. Cpu profiler shows the following: 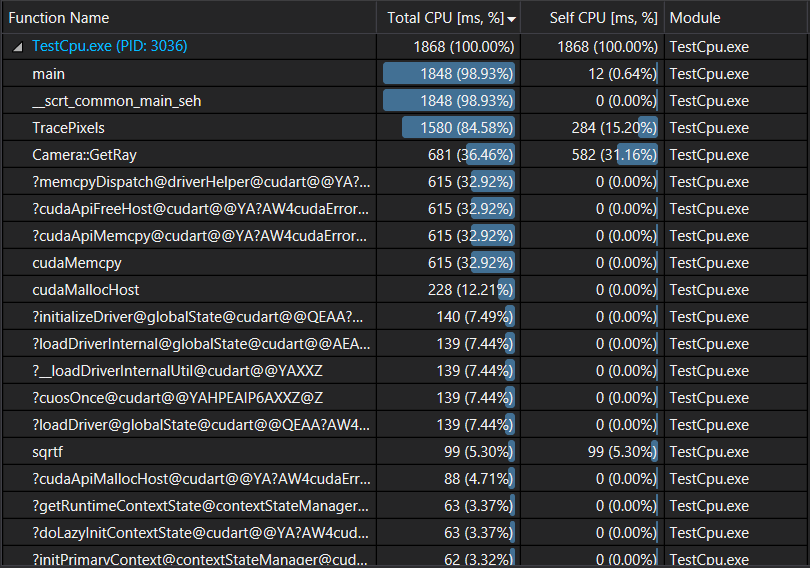 Looks like the slowest part is now the camera ray generation as it takes 36% of the rendering time. There is no reason not to move it to the gpu as well as it will also remove the need to copy the rays to gpu at the start of each frame.

Moving ray generation to the gpu is not complicated. We add a new kernel that will generate the rays using a xorshift random state initialized as we described before. Most of the changes involve refactoring the renderer code to handle both cpu and gpu rendering. Here is a link to the commit.

Rendering performance went up to 86.5M rays/s. The renderer is nearly 11x faster than the original single threaded cpu implementation.

A look at the cpu profile shows that 90% of the time is now spent in the kernels: 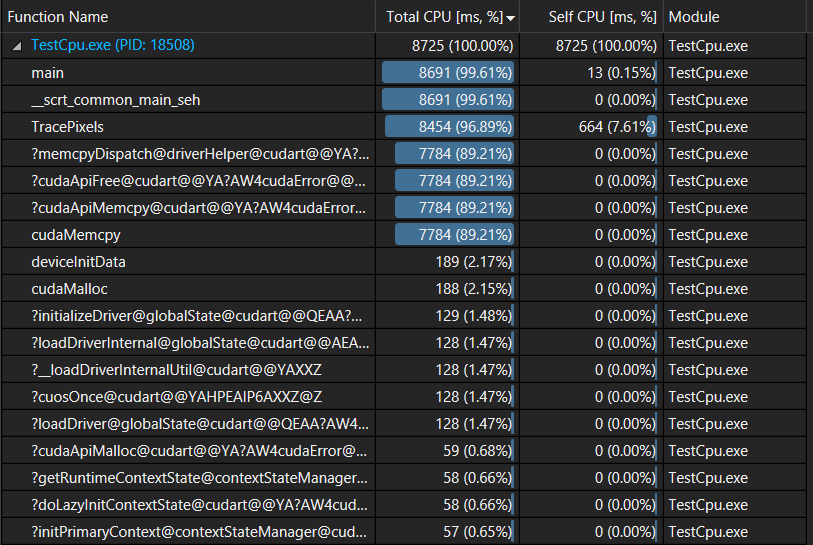 and nvprof show that Scatter kernel takes nearly 50% of the device time:

It took us some time but we are finally at a point where most of the rendering time is spent on the device, which means in the next blog posts we’ll start exploring how we can optimize the kernels.